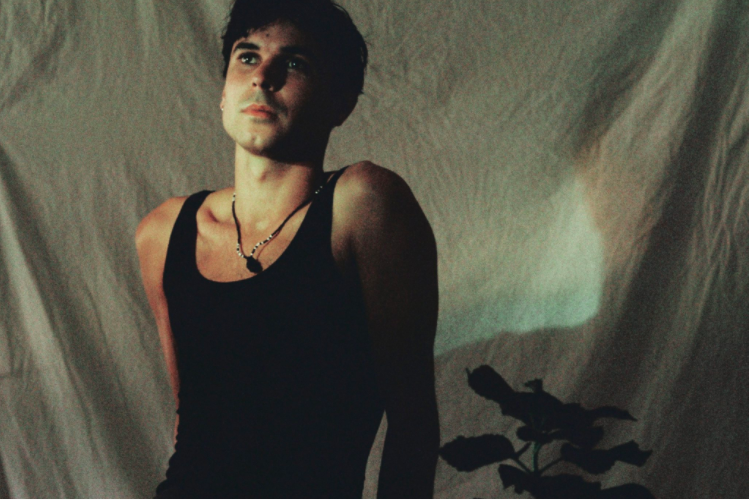 A chaotically animated music video for a song about a caterpillar who refuses to turn into a butterfly. The video is filled with brightly coloured flowers and insects moving at a fast pace depicting Zac’s rainbow surreal world.

Over the past decade or so, Zac E Tea has been a fixture in the Melbourne music universe – whether that be holding down the wonkier guitar parts amidst Hobsons Bays Coast Guard’s surf-rock mishmash, or more recently as a Rocket Clock in Zoe Fox’s zany psych-pop project. It’s also likely that any of these band names have been plastered around town on posters of Zac’s own design, as over the past few years he’s developed a growing collection of visual art, whether that’s across album covers or gallery walls. Vivid and playful, and often addictively surreal, his recognisable style isn’t too dissimilar from his charismatic personality.

Tell us a bit about the process of making this piece

I started out just going for it really, without much planning. I didn’t have a good grasp of how to animate frame by frame, so a lot of the first shots I made were testing out the process. As it developed I went backwards and started storyboarding sections, then made them into scenes in photoshop. I constantly reviewed it, moved scenes around, ditched some and replaced with new shots to make it more cohesive. Generally, it’s a pretty chaotic method, but I also wanted to whole piece to be chaotic!

A lot of the process was trying to make it look as painted as I could inside photoshop. So I spent a bit of time making studies with watercolour and acrylic. It was kinda fun, overtime I’d get tired hunched over my laptop so I would moved to paper and pen instead of just stopping.

How do ideas of sustainability intersect with your practice/works?

I guess most of the work I do is digital, but if I ever get prints made I do it by order, so I don’t have 500 sitting under bed that I’ll never sell. Such a waste of paper!

What role do you believe artists and creatives have in influencing positive societal change?

A big one! Even if it feels small, everything counts. It’s also hard to be positive 24/7 sometimes I just want to make something about anything and I think that’s fine too.

What change would you like to see within your industry/community/scene?

I’d like to see more of these sorts of incentives happen. We should green everything!

Do you have any ‘green’ tips for fellow artists?

Change your bank and super!

How would this calculator be helpful for you?

I think it’s great to have an idea of how much carbon we emit to play gigs, something I never really considered before. Hopefully, more venues will switch the renewables.