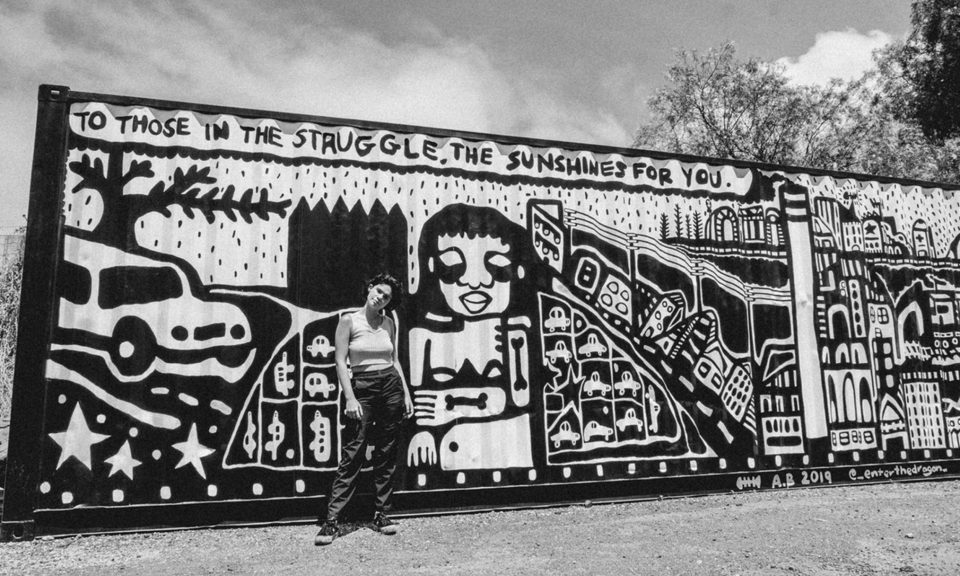 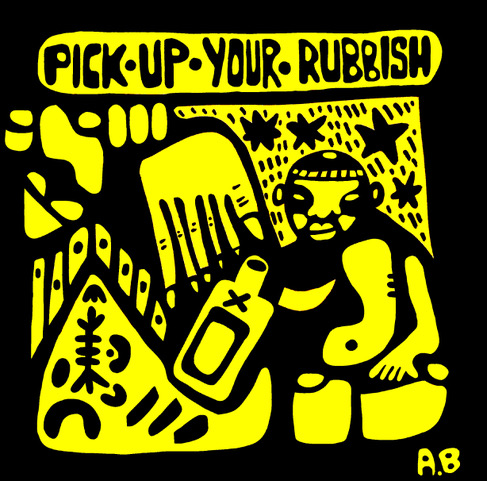 This work is about the small instances throughout the day one can perform to help look after the environment. And while I do firmly believe in the power of large corporations investing in sustainable practices, as opposed to individual actions in the fight towards a cleaner future (i.e. buying a keep cup vs a government switching to solar energy), I do think that there is still an important role to play for people at a practical social level. I have my own thing where if I’m ever walking and I have to physically step over a piece of rubbish I have to pick It up. I do it so regularly now that it’s not even a big deal anymore and I forget I do it. These small things are humbling and help us understand the relationships and connectivity of Australians and our environment, and our role within it.

Aretha Brown is a proud Indigenous Australian youth activist, visual artist and the former Prime Minister of the National Indigenous Youth Parliament.
Aretha made headlines following her speeches at both the 2017 and 2018 Invasion Day Protests in Melbourne. The then Year 11 student, addressed an estimated 50,000 protesters in Melbourne on Invasion Day, calling for the date of the national holiday to be changed.
Aretha describes her art practice, as a means of giving herself a context in which to live, Brown is inspired by Melbourne’s Western Suburbs and her journey as a queer teenager. Aretha’s first painting “Time is on our Side, You Mob”, is currently in the 2019 Top Arts exhibition at the National Gallery of Victoria (NGV). The work itself draws upon her experiences in social and political spaces as a young Indigenous teenager.
Aretha is currently studying painting at the Victorian College of the Arts and has since appeared in the new ABC TV documentary “Will Australia ever have a black Prime Minister?” And Annabell Crabbs “Further Back In Time For Dinner”. Aretha is currently making public large scale works around Melbourne and has an exhibition coming up at Westspace.
Aretha is also currently writing and filming her first comedy short titled “How to be Cool in Melbourne”.

First Nations environmental leadership and things allies can do to help

We must wake up now! This current government continues to disregard 65 thousand years of sustainable land management, in favour of only 250 years of greedy, capitalist theory and disconnected policies.

My message to the liberal government – the one that we elected – is that you must listen to what Indigenous people nationwide and globally, are telling you! We know what we are doing because we have been successfully doing it, for thousands of years. WE KNOW THAT ONLY USING WESTERN ENVIRONMENTAL TECHNIQUES IS FAILING US AND YOU NEED OUR HELP.

Aboriginal people are just 3% of Australia’s population, so we need you, our allies to help us fight and protect our country look after our wildlife and to protect our waterways. Which we now all share, and have a responsibility to. We are only as healthy as the community, land and water around us.

These are my 3 calls to action:

THIS ALWAYS WAS, AND ALWAYS WILL BE ABORIGINAL LAND.

I often get asked what are some practical things allies can do to help young Indigenous people, and also help fight climate change. In my opinion, it should ultimately be changing your bank. The “Big 4” banks – NAB, ANZ, Westpac and Commonwealth – together have loaned more than $2.1 billion to the dirty coal, oil and gas sectors since 2015. I highly recommend jumping onto the Market Forces website and checking to see if your bank, lends or doesn’t lend to fossil fuel companies. These corporations kick Indigenous women, children and peoples of sacred lands, case in point (Adani).

It is super easy to change your bank, and if you can even let them know WHY, you have decided to do so, it holds these companies responsible and accountable for their actions. It’s not individuals who aren’t buying keep cups or not having 3-minute showers that are ruining our country. Its BIG BANKS, CORPORATIONS and LIBERAL GOVERNMENTS. And unfortunately, every time you swipe your card to buy milk at Woolies, or order Uber eats at 3am, you could be, inevitably supporting these systems.

It’s weird how its all connected, but it doesn’t surprise me how we are not taught about this. These decisions will affect your children, we are young people and it’s up to us to change this. So, see if your bank supports mob and the environment, or if it doesn’t. Its that simple. And yes I understand that some of these companies have projects that target these issues, but they are still banks. It’s your money, put it somewhere that doesn’t come back to hurt you.